Whose Sock Is This?

The other day I went outside to start the laundry because otherwise we get buried in it. Oh! Why did I go outside to start the laundry? Because apparently the Espinozas are the kind of people who like to air their dirty laundry in public. (At least it's not stinking up my house.) Not to mention the fact that some of them have no problem with baring all either. I'm sure this is mostly due to the big quick set pool in the yard. In any case, I get at least one load a day out there. I am so energetic I decide to finally throw away the wet pull ups experiment collection: the one where you see how much water they will hold before exploding. Out front there are a few more wet items, and standing in the driveway, backsides facing me are two wet little boys, one with a swim vest, one with goggles on, both have pulled down their wet swim trunks and are peeing into the gutter. A real Kodak moment, but I don't have a camera with charged batteries. So, I try to explain to them why they don't want to do this, as simply as I can. "O.K." One responds. "Do you understand, then?" I ask. "Not really," he says. "Do it anyways," I say. Once I get them covered again, I go in the house and start the wash, then attack a mountain of dry clothes. Remember the stray sock bag? It got too full and I had to donate them all to the Amputees Society of America, or Sock Puppets Inc. or something, because who can throw away a good sock just because it doesn't have a mate? I mean, would I be disposable if I lost my mate? I have a new bulging bag of lost socks again, but now I know they belong in Las Vegas, because I saw a whole lounge of them in an M&M's movie there. So I'm pondering the deep meaning of socks and thinking about how much more entertaining my old bag of socks were, when I pull THIS out of the pile: 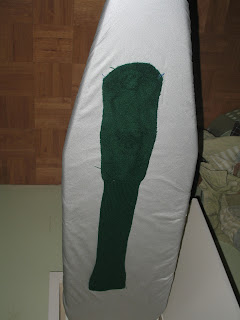 Now how in the heck did this get in my house? Who does it belong to, Shaquille O Neal?
I know somewhere out there in Indiana or something there's a giant of a person doing the wash and out comes one of the lost little mates to my companionless bunch. If perchance you see it on another blog, direct them my way; I still haven't sent their sock to Las Vegas.

On To Less Earth Shaking News:
I was just thinking maybe life was getting calmer. I mean, no one tried to burn the house down on the twin’s first day of school. Yesterday, however, D2 decided to stick a small screwdriver into a socket downstairs which made a loud bang and knocked the lights out for a few seconds. The screwdriver tip was melted a little. I told him all the reasons why he shouldn’t do that ever again, and he said “You’re scaring me mom.” I asked if it scared him when it went bang. He said it scared his tummy. But, he said he liked that.

D1 found a science experiment. A real one, that E. did but never threw away. I think she made salmonella. E. is loving school this year. PAUS is perfect for her, and she’s finally excited about learning again. She got a job at Down East Outfitter. My two boys at are alternating days at school right now since they don’t all fit in half a school at once. They are supposed to be in the new building week after next.

Supposedly I would be working more hours now but the bus for D&D has been spastic, and either they don’t pick them up or don’t drop them off or don’t drop them off at the right place, so they ended up taking them back to school and I had to go pick them up. Then C.’s first day he tripped and hit his head on the cement gym floor so they sent him home early. He turned out to be just fine. Last night I sent G. to take a bath, and after a wild party ensued and no bath, I finally got him to bathe, followed by D&D, after which they began chasing each other around till G. slipped on the wet floor and hit his tailbone, head and arm. I’m not so sure he didn’t do something to the tailbone, but I don’t think they’ll put him in a cast for that, so we’ll see how he’s doing this afternoon. We have to go to speech down that way anyways. And continuing the medical theme, J. is having knee and back problems and we haven’t been able to find any real solution for him yet which is a bummer. School is killer this semester, and he's dizzy. I also found out that stars make D2 sick, at least that's what he told me (you get stars for cleaning your room). After a whole summer of trying to earn stars he and D1 earned themselves a transformer. But they are sold out everywhere so we had to order them from Hasbro. They just came today and they were so overjoyed.

So, Labor Day we rested. Slept in, read New Moon, watched funny videos on YouTube, basically wasted the day and had fun. We saw a good video, called The Ultimate Gift, which I can recommend because there's nothing bad in it and E. liked it anyways, even though it overtly makes a point about things like work, which she doesn't like hearing from me.

Everyone wants to tell Boomer they miss him. Hi, Boomer! Oh, and Amy, see the blog here for the Yet another mom, it is the lady who's E Bay auction you forwarded to me. It is spooky, as in "Killing Me Softly With His Song". I now believe in parallel universes. She even has a husband who works 80 hours a week in maintenance and remodeling, and has pictures of kids with q-tips stuck in all their orifices and just had a go-gurt explosion, and I could go on an on, it is all the same thing, not just the universal parent stuff, but the details. It's so much funnier to read it happening to her instead of me, though! Thanks for that one. We really enjoyed visiting with Chris last week, and hearing about you Texans. I loved hearing about Sara aspiring to be a carbon based life form. I was thinking, some days that could be my standard, as in: Today, don't expect much more out of me than that I will be a carbon based life form. Now you're worrying about all the other stories he told, huh? Gotta go! Catch y'all later!

P.S. Here's the letter about the old sock bag:The
rest of the week I spent with the laundry. As soon as I got to the last batch, it was the first in a trail of 3-4 piles. Not that I'm complaining at all, mind you, I'm overjoyed with gratitude that there's only 5 of us! However I think I got a little delirious after 3 days of both starting and ending the day with laundry, cuz I started singing (to the tune of Billy Joel's lullaby) Someday we'll all be gone, but laundry just goes on and on... It never ends, it's what you and I'll leave. But while we're on the subject I wanted to bring up the subject of unmatched socks. I love that
essay by Erma Bombeck, remember that one? I laughed so hard I cried. In any case, it's come to life in living color in my house. Where does the other one go??? How come they haven't clogged up the washer or dryer yet? or do they pulverize them?? The ones that are left go on with life though, let me tell you! I decided to get scientific about this cuz J. said somehow the whole pair doesn't make it into the laundry and the washer is innocent. I started putting all the unmatched socks together and went all through the house, through drawers and everywhere collecting those loose things and everyone that comes out unmatched after folding the laundry goes in there. It worked pretty good in the beginning because I found a lot of matches and avoided a lot of further separations, but they keep showing up. Not only that, they have children; smaller versions of the exact same sock appear or socks that look like a combination of two other socks but not quite either one of them, and nothing like we ever owned before. I know most of you don't believe me, but it's true, and you can even come and see them for yourselves if you'd like. The container keeps changing to something bigger and I'm shocked we're not down to using 1 sock at a time, however, E. did appear to be wearing a pair that were in opposites: one white with red design and the other red with the same design in white. Well, I'd like to keep
chatting but I'm too excited about cleaning up the kitchen so I'll go no further with my wondering on the mysteries of life and go enjoy it.

I am so glad you decided to blog! I miss you guys... tell all the kidos hi for me!!