Happy Valley alert!
I would never have thought it but the Beautiful Bodacious Babbling Blogging Babes is a cover up for a group of huffers. Just listen to what I overheard at their last gathering....
It started out just by letting the little LDS guard down a notch..."I need some coffee"
Then they moved on to more hard core stuff... "I want to sniff that!" " I'm getting a sniffer's high" These were all a bunch of married Mormon ladies with kids mind you..."I think I'm getting a headache." "Yeah, I think you're going to get a big hangover" Did I mention there were babies present? In front of babies! It gets worse! "Did you get naked yet?" I can't go on!
I have to tell the truth. It was an Urban Botanics party. There were a gob of oils and we got to make our own fragrances! It was the funnest thing. Honestly, I didn't think it was going to be that exciting, but who wouldn't ditch their kids for an hour to eat a buncha yummy potluck and socialize with some fun ladies? Then I suddenly felt like I was living the movie "Perfume", which by the way was very, very well done and sorta in the realismo magico genre, which I love. However, don't see it if you didn't yet, unless you can find one that got chopped up with scissors because it has scenes that are inappropriate for your eyes (and mine, but I'm brainless and need to learn to be more selective) plus it was just plain macabre. All that aside, the cool thing about it was how they portrayed the main character's sense of smell and quest to make the perfect perfume. That's the point. Soon I was on my quest to make the perfect scent, and I made a pretty good one considering I was a confused newbie with not the best sense of smell. I made a lotion out of it and the lotion is really great too! My hands and elbows and husband are loving it. And now I'm addicted, I want to make more scents. I will do it again someday. My first is called Summer Dawn because it reminds me of when I would get up on vacation and go out to my grandparent's trees and climb them to pick a grapefruit for breakfast. Another great friend there, Jeri made something with my scent too. I love the other scent she made, so we obviously share scentuous tastes. So, our hostess, Karlene 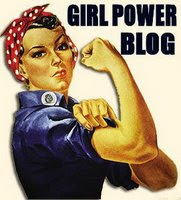 This is in response to a post by Burgh Baby's Mom: I saw this recently while going on a court assignment. What the....? Had I only known, I wouldn't have bothered even having babies. I really need to keep a camera in the car. I went back just for you. Sweet dreams! 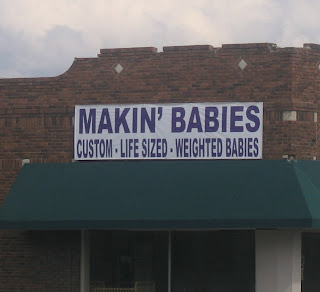 Weighted babies? As opposed to, what? Weightless babies?

I know! Isn't that insane??

I know you come over to visit my blog frequently. You even comment and everything! And yet... I'm not on your blogroll.

It's cuz I'm just so lazy, my blogroll is from like the first month I started blogging, I'm so lame, I just can't keep up with the housekeeping around here! You are in the blogroll of my heart, hon and once I update, you're right up there!!

WHAT THE H%LL? Weighted? Life size? WHY? I guess at least the fake ones don't talk back. And if they do, then you've got bigger problems, right?

I have totally missed out on registering on car at least twice. Same reason--I hung the thing up to take care of it later and later never came. Oops.

Sounds like a fun time with the ladies - I could use a ladies night out!! Have a good day - Kellan

That make-your-frangrance party sounds like fun... as long as you can smell (my sense of smell is back, so I'd go!).

I love the story about Thing 1! That's so sweet.

And I'm really freaked out by doll makers now, between this and BBM's post. Yikes!

*giggle* Oh that's a silly sign. I wonder what folks would do with said baby once they had one weighted?

Wow, so are you going to retire off the proceeds from your fragrance?

And I'm with you on that baby thing. I could probably let those at home when I want to with no laws being broken.

LOL, Karen! I could maybe make enough to buy a stick of gum someday.

LOL, Karen! I could maybe make enough to buy a stick of gum someday.

Hey, I just tagged you on my blog.

I love your random updates! Love to read all the goings-on helps me feel normal! :) The sign is killer!:P