The Saga of Buckley and Hurley

When we left off, our cloven hoofed friends' future hung in the balance. I put out an ad. No response, so I put out an online ad and got a few responses, but I was very nervous about them because they really didn't seem to have a realistic idea of what caring for them would entail, and quite frankly, I wasn't so sure they wouldn't end up on their barbecue. But, their charm saved them. The family who was housing them decided to buy them and do a little switcheroo with some other people they knew so each would end up with a billy goat and a nanny goat. They were going to do that in October because if you let them breed earlier their babies are born earlier than optimal for the weather and they often don't make it. Meanwhile, once they decided this, I got a flurry of calls for the goats and some were not even hiding that they wanted those goats for dinner! But instead of being the center of an awesome barbecue, they are now pygmy goat studs, or newlyweds, however you want to look at it. If you go to Paul Mitchell the school, and wash the goat's coats with Paul Mitchell pet shampoo, you think of them as newlyweds, and if you are a farmer, you think of them as breeding machines and don't use any kind of shampoo on them at all! We miss our little guys but we are so happy they got a great ending! 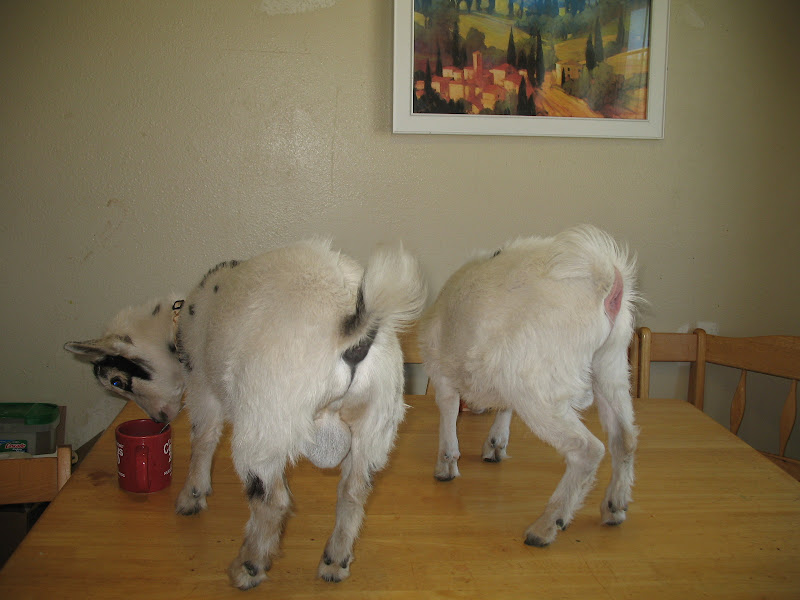 Glad they are happy!