GIFT UPDATE
"It came without boxes, ribbons or bags!"- the Grinch.
I figure, as I think about it more, that it can just come without them, there are way more important parts than the gifts. Just sharing love and time doing things with people you love is the most important part. We are only giving our kids one toy this year, and long underwear. Then we got a few videos, a few games, and a few exercise things for the whole family to share. It still looks like there are a ton of gifts under the tree. I had some fun wrapping. There was a hole in the paper right in the middle, so I just gave the present pin tucks to hide it. Then I got a huge roll of reversible paper for cheap and had some fun with it. 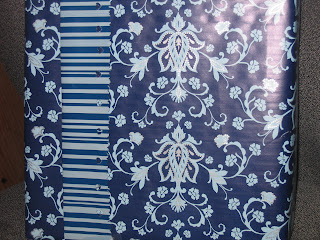 I just got a cool catalog where you can order donations to charity for specific gifts for people in need in other people's names and they send them a card to let them know. For example, you can order school supplies for a child, or a fruit tree for a family, etc. If you have to think of a gift for someone who already has everything, why not? The only present I have left to get is for Papi. Would you like a pig for a family in Africa, mi amor? One year we gave money to UNICEF for the children of Sudan in lieu of a gift from Santa. We talked it out ahead of time and decided to ask Santa to take gifts to those kids instead. We made a typical dinner from Sudan that night and talked about how so many kids live in tents and don't get that kind of meal anymore. The kids were glad they helped. My other Christmas tradition is to stall it. In many Latin American countries, they celebrate Three Kings Day on January 6. So in all the after Christmas sales, I get each child a gift from the kings. It's nice to spread out the fun, and less new things at the same time. Having our kids give gifts to each other has always been a big bomb, as in we take them to pick out a present for a sibling and all they do is scream that you are not buying them a toy they want. Maybe when they're older, but for now we just have them give an act of service to a sibling.
Corporate America gave me a gift this year. They don't want contract interpreters next year, but they are pleased to have a third party hire us to pay us 65% of our former earnings to work with them and take a percentage of what our client used to pay us. You have 10 days to decide. Merry Christmas! Due to the fact that they were so generous as to give us our flexible schedules (you decide, up to the minute if you're working today or not) and I am still living with my kids, I am going to work for a sweat shop in 2008. I'm also going to finally keep that goal to be frugal somehow. Well, maybe more frugal, kids completely sabotage frugality. Next year I will decide what to be when I grow up. Any suggestions?

DECORATING UPDATE
Deck the tree with balls of glass! Pop, Crash! Pop, Crash! Crash! Pop, Crash! Crunch, Crunch! Papi insisted on using the balls he bought last year on sale, enough for two trees and after smashing a bunch last year there is enough leftover to almost decorate the whole tree this year. The TOP half. Thanks to Gigio our tree has decorations on it now. Seems we used to decorate together, but those memories will not be made this year. After about 4 days with a bare tree, he gave up and took the bull by the horns. Wish he'd have the same initiative with chores and homework. He's killing us both on that end. Thanks to Papi, we have enough lights and junk decorating the outside of the house to light the neighborhood on fire. It's really kitschy, but at least we are festive. Erika hated riding the bus on winter mornings and having kids exclaim, "Whose house is that?" At least the kids have broken half the stuff so it's not as bad. Looks like the poofy air filled decorations might bite the dust this year too so next year I may have a yard. My parents have a few lighted reindeer they had to put away this year because someone keeps putting them in a mating position, so he wants to ask them if he can have them. I'm not going to remind him. This year there were not enough lights for the third wreath to reach it's spot on the other side of the window, so it is just kitty corner to the other one and under the window instead? He always does this. Once he hung a picture semi overlapping another one, just to not make a new hole in the wall. When he's in a hurry to get something up, all aesthetics are thrown to the wind! It drives me crazy, but this year I'm too busy to go fix it. The nativity has suffered some losses. Mary and the baby Jesus both need limb replacement surgery. Here's some pictures. #1 the decorated half. #2 You can't see it but Jesus' arm is next to him in the manger. There's an air headed king next to them, and Mary seems to have been working in the wood shop, and didn't follow safety procedures. #3 I haven't taken yet, it's too cold outside 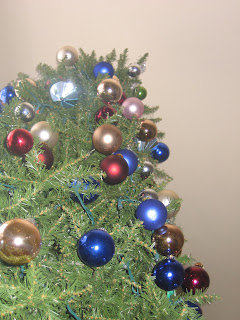 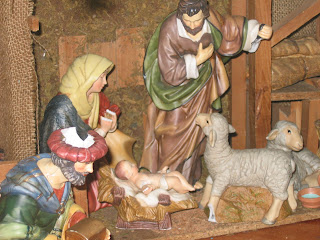 NAUGHTY OR NICE?
Thing 1 was sitting on the floor by the tree. His brothers were sitting on the sofa just next to and above him. He asked me if his present under the tree was a toy or not. I asked him if he'd been good. He reached up and bit Carino's leg. Guess we know the answer to that question. He and Thing 2 have decided it is fun to raid the medicine box in the linen closet. I found this out when they were asleep and I was picking up around them and found a Tylenol Jr. bottle open and mostly gone. Thanks to poison control, I can now inform you that a 40 lb child would have to consume 2400mg of Tylenol Jr before you would have to take him to the ER. Thank goodness that is the whole bottle.

ALL I WANT FOR CHRISTMAS...
Is a sharpie pen (they stole it and used it in ways I never would and left it out to dry.), a box of safety pins, and a lot of dental floss (same reasons).

CHRISTMAS PAST
Just a few shots from last year. On the side bar there is another Christmas past if you haven't seen it. 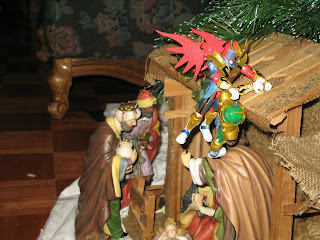 And suddenly there was in the heavens a host of power rangers, come to save the baby king... 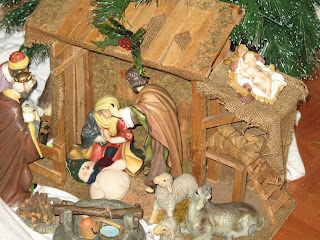 This one is why my children weren't siblings of Jesus.

CHRISTMAS MEMORIES IN THE MAKING
Yesterday we froze our noses and looked like street urchins as we went downtown to see the candy sculptures in the windows. They are incredible. They are incredibly hard to photograph with the sun shining in the window. The kids looked like urchins because both Carino and Thing 1 left their coats at school, so Carino bundled up in a fleece blanket and Thing 1 wore a coat about 3 sizes too big for him. In hindsight, we could have had them switch places but Thing 1 got picked up first and thus had on the too big coat and Carino had a blanket with him because of a class activity involving blankets, pillows and reading. Today we are going to make our own candy sculptures. 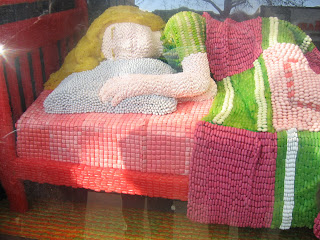 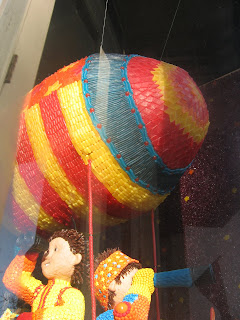 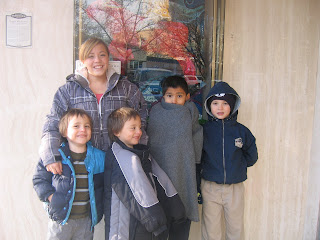 OTHER STUFF GOING ON AROUND HERE
Enigma actually participated in Young Women in Excellence this year (showing goals you achieved in different areas) They all did presentations on not just what they did, but what a female ancestor had done and she chose her grandma. She showed the quilt her grandma made her and a few dresses and cross stitch she made as well as the family history book she gave us.

Carino had a birthday party at a skating rink Thursday. Last time we went he wouldn't skate because he wanted to play the arcade games and I didn't bring cash for that. He had a miserable time. This time he jumped in and skated almost the whole entire time and had a blast! The next day he could barely move his legs. It only took us an hour to get there and another 45 minutes home in the snow while driving past about 6 accidents. Sort of put a cramp in my plans for the evening.

Last Saturday was a major snowstorm and I battled through it to get to Lehi to give my cousin's son's fiancee a gift. It was fun. Funner than trying to get the whole family to clean the house together all day before that. Even Papi was trying to sneak in a movie and pouting when I made him work. Now I know where they get it from. (actually, I think he must've been sick.) And in a monumental moment in time, after 5 years on this planet, both the things finally let me actually touch their hair with a comb! I thought someone else had possessed their bodies. I still can't actually get a good combing but I can gently tamp down the bozos with a damp comb. I've got to go clean some monster blood up off the floor. Take care and stay warm!
Posted by Shellie at 7:37 AM

Fun blog! I love the photos...what a hoot. Thanks for visiting mine...have a good one. ;)

Hi there. Just wanted to extend a special invite to all the Blogging Babes to participate in my Winter Reading Challenge. I'm hosting it over on my Inksplasher blog. It starts Dec. 22nd. Details on my blog.

I love your description of PApi and his unasthetic decorating. He sounds like a kick!

Loved all the pictures and all of your updates!

Very fun photos!
Sorry to hear about the work "Christmas" present - boo to them. ~sigh~

Sounds like you're on your way to a great Christmas though!

LOVE THE WISEMEN....they look more entertained than mine! HAHAHA With super heroes and all!

Would love to see what candy sculptures you completed!