When the weather thaws and the sun warms the earth, the insects emerge again. Soon, the children are spending their days in the yard, digging, chasing bugs, playing with the neighbors. They come in and out, getting drinks, toys, popsicles. Rarely does the door shut behind them. Soon, there is a colony of flies zooming around the house.
One day I ask, "Son, where's the fly swatter?"
He responds, ""Wha swysatter?"
"It's the stick with a floppy square at the top you hit flies with."
"Oh, I no catch like that." he says.
So true. In our house, there are two kinds of flyswatters, the regular kind you buy at the store, and the human flyswatters. You might think the traditional flyswatter is more effective, but if your flyswatter looks like this, 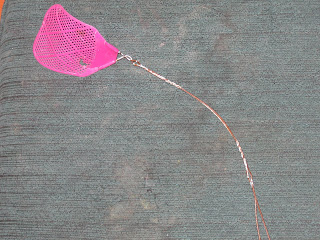 you might prefer the human kind.
I'd like to introduce you to the Fly Whisperer. You've all heard of the Horse Whisperer and the Dog Whisperer, but I bet you've never heard of the Fly Whisperer. Since he was two, going on three, he's been catching flies. We can't explain how. Both he and his brother love bugs, hunt them down all over the yard, overturning rocks and stepping stones, digging and catching them with nets and cups. There is no fear. They love dragging them into the house to share their room for a while. They love books about all kinds of insects. But, how did the Fly Whisperer learn his trade? I don't know. Instinct, maybe?
His dad believes he hypnotizes them. "See how he follows them with his eyes? He watches and waits closely until the fly stops within reach, then he snatches it before it knew what was coming. Why doesn't the fly just fly away like it would with the rest of us?" He hypnotizes them with his eyes while they buzz around." Who knows?
Then his impy brother learned his trade. Once a fly he was holding by the leg broke loose, leaving the leg behind. That was all it took to start the fly circus. He thought of clipping their wings so all they could do is run around in his hand. Mom did not approve. She has visions of B-movie over-sized flies seeking their revenge. (Mom also wants little fly whisperers to wash their hands!)
So, If you're a fly in my house, for your sake, I hope the original fly whisperer catches you and takes you outside. If you're a human mom trying to get rid of flies, sorry, the Fly Whisperer is mine! 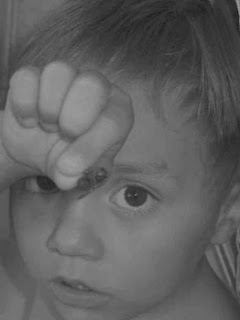 My daughter used to be the fly catcher but she's moved on to greater things. Her brother is only too happy to fill the vacancy.
Cheers

I think all of my children have had that uncanny flycatching talent around age 2-3. They lose it pretty quickly. Much to my chagrin. It was a great way to have a cookout: the kids were occupied away from the grill's flames, and our food was fly-free.

How interesting - I remember our oldest two boys having this funny ability to catch flies right about that 2-3 year age. So funny to remember .... especially on the living room picture window if a fly landed at their height, one would give this quick huff of breath on it and the other would swat it with his hand. They killed many flies this way, and we always watched in amazement! So funny to hear that other kids have done something similar! Joni

That's an interesting talent. haha I'll bet it keeps them entertained for hours, which isn't a bad thing.

I think after a couple of months even I will have one fly-whisperer in my house too. My kid is one in making.

Sounds effective! My kids in Taiwan were mosquito catchers... we let them tape them to the white board... we had about 50 of them by the end of the semester. ;-) I am updating my blog finally, bytheway.

You can have all my flies. Too cute though. Does he get mad when you mash the fly with the fly swatter?

Jennifer @ Fruit of My Hands said...

Wow, that is amazing!

loved this post....am considering mailing you a fly swater from the dollar store :)