So, you've been wondering what my boys did all summer, have you?  NO?!  Too bad, I'm going to tell you anyways.  Tom and Huck continued to go fishing a lot, and Thing 1 got into it by the end.  Thing 2 is still a hardcore engineer.  If you can get him out there however, instead of fishing, he goes all Jeff Corwin on you and brings home snakes to keep in habitats he builds them and keeps on the front porch.  Others like Tom try to bring home and keep pet fish.  I think we have finally convinced them to let wild animals be wild after so many dead fish and lost snakes. 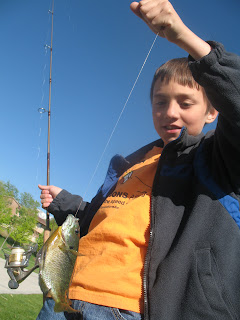 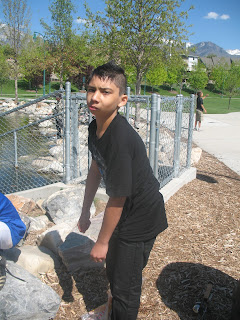 Here Huck got caught by a fish-soaking wet!
Tom also informed me that his armpits smell like sour cream and onion potato chips.  Do you think maybe he should bathe more often?
Huck, meanwhile, joined in on some sports camps this year.  He paid no attention to the smell of his armpits but the smell of his feet spawned a whole crew of bath police on him.  He did basketball, volleyball, swimming and diving this year.  He loved the diving and was invited to be on a team for kids at BYU so he is starting that now.  In order to be on the team, he has to do good in school, and we are seeing what a difference high motivation can do for his academics already.  We just hope it keeps up!

Tom did at least volleyball camp, and I can't remember if he did soccer or not.  He and Huck also went to two scout camps where they learned a lot of stuff and got merit badges and got filthy. Tom has also picked up bowfishing and recently got a guitar he hopes to learn to play.  He is also going to learn more archery this fall.

Meanwhile, I had all the boys on Rosetta Stone with the deal that for every unit they completed they would get a prize.  The Things are very into Beyblades lately so that was their motivation.  Tom finished the whole first level and everyone else is on their last unit of that level, so we finally got somewhere after I think 3 years I've had the program.  we are on our 4th or 5th computer as they all break down and we have to go through this big hassle to get a replacement and get it installed on the new one.  We have gone through about 6 headsets so far. But, since the last 3 years we never got past unit one and now we are on units 4 and 5, I have hope.

We also read some fun books together including Cosmic, A Year Down Yonder and A Long Way From Chicago, and The Watsons go to Birmingham 1963.  Probably we read something even better but my brain doesn't work that way.  I can highly recommend each of these reads and the boys all loved them too.  Now we are reading Ender's Game. Of course I forgot to read them Farmer's Boy since that was the school's plan.  We checked out a lot of comic books ahem!  Graphic Novels this summer from the library too.

While the Things built various and sundry things like weapons of mass destruction and went swimming with friends, and tried to overdo their screen time, my big boy, Papi was supposed to build a Beauty Salon for Enigma in my former office and fix the downstairs basement.  Enigma, who is not a boy, will of course remain mostly Enigmatic until she complains that I don't  talk about her and tells me what I can tell you.  BUT  I will say she is mostly MIA with her cute B-O-Y-F-R-I-E-N-D who consumes her life.  We are too boring.  They did grace us with their presence long enough to rip all the cabinets out of the office so Papi could remodel the room.  I cleaned out almost all my stuff and got things boxed up in the downstairs family room.  And then, Papi decided it was urgent to do a total landscaping makeover of our yard.  Cuz that's how he rolls. But, since I reminded him that it took him 2 years to lay all the floor upstairs after ripping it all out, he did the whole thing in just under 3 weeks; WITH the help of a very bored newly retired buddy who kept him at it every day.  yes, the Espinoza Family Circus was his entertainment. While my basement is still languishing, and our bathroom is sorely needed now that school started, I can at least enjoy a really nice yard.

Here are the illustrations: Here's the garden before-sky high grass: 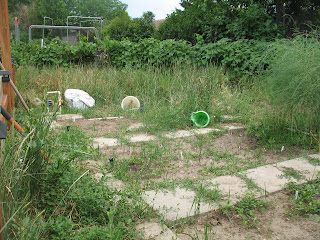 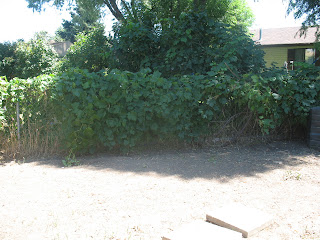 And here's after!  grass gone! Next we have our borders all rocky and plants planted- 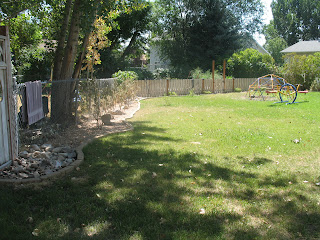 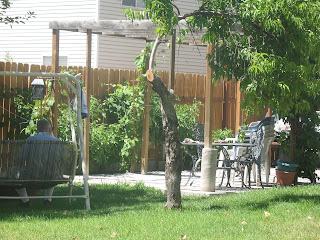 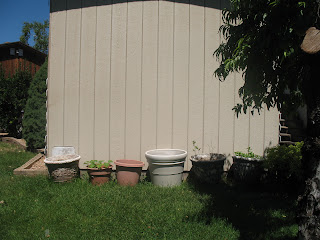 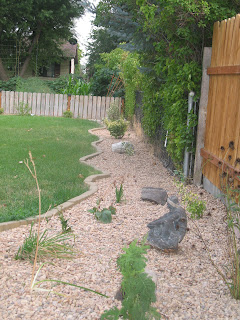 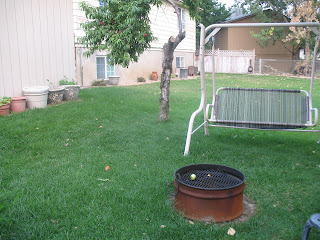 We didn't get a lot planted, but the grapes and nectarines are awesome this year as are the tomatoes! As you see we even have an artichoke! And baby corn! 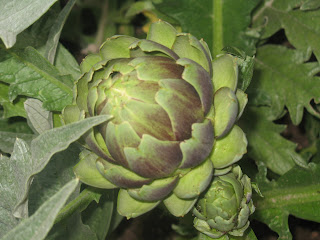 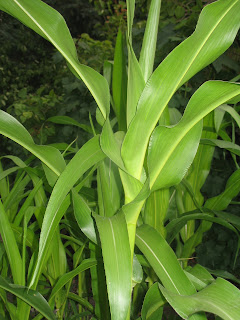 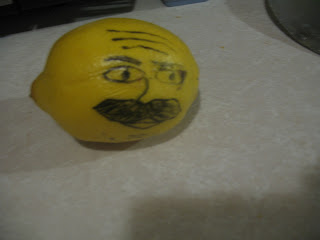 This lemon head visited us this summer too. I've already forgotten his name. He met a tragic end.

cool! looks like a busy yet productive summer! I wish I could say the same for us...

The yard looks great! You put me to shame all the things you manage to accomplish! Sounds like the boys are doing lots of fun things.

Um, that was Juan accomplishing all that...